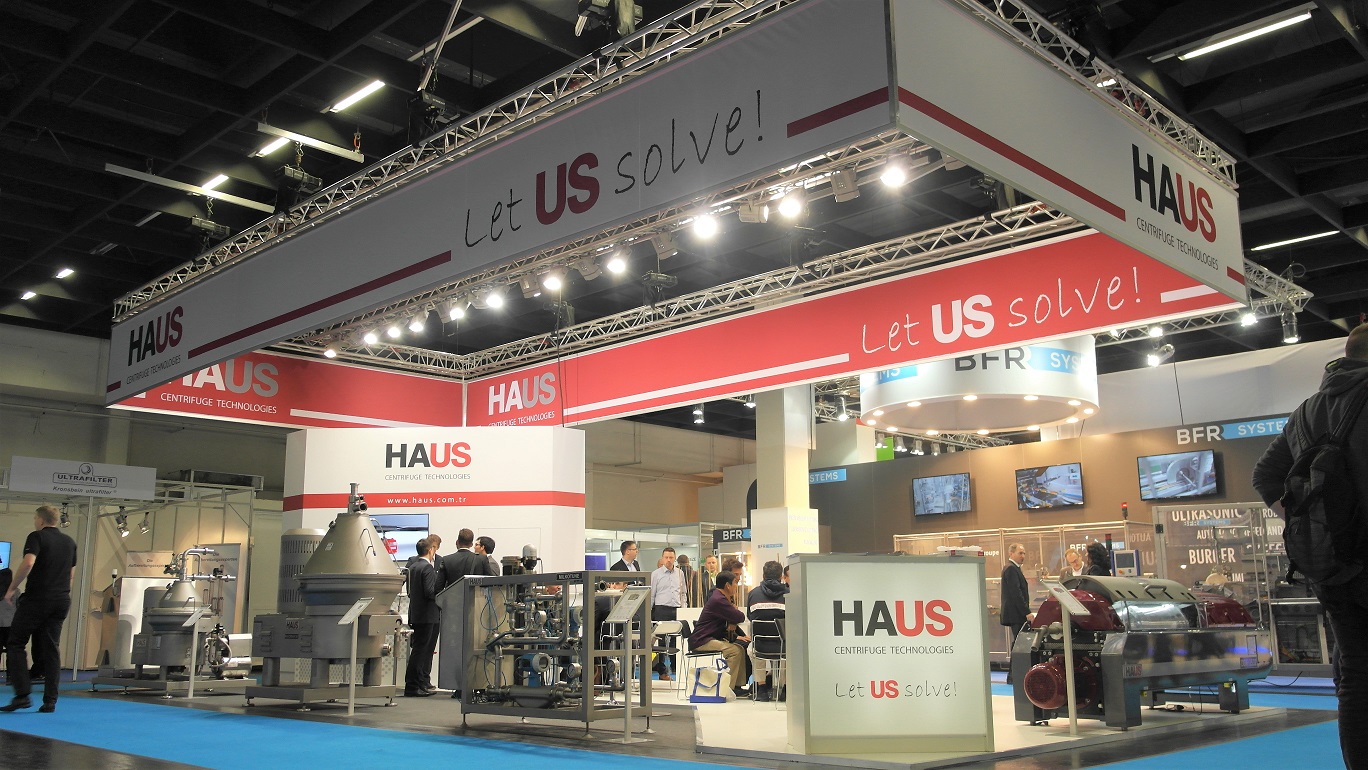 HAUS attended a food processing fair, Anuga FoodTec, which took place in the city of Köln of Germany between March 20-23. In that fair, it exhibited its DDF 2342 decanter, Maxcream 10T Skid cream separator, Maxcream 30T and Milkotune Standardizator which it put on the market last year. It first attended that fair, which takes place once every three years, in the year 2012. It was its third this year and it is predicting to be in that fair in the year 2021 as well. Each time it had its place in the fair by increasing not only its exhibited products but also its exhibition area. During the fair, detailed information on the products HAUS presents for food applications, services and solutions was given to the visitors. The visitors who showed great interest to the stand had effective dialogues in line with the requirements of their plants. The company which does Research&Development activities with an innovative approach in its machines in line with the requirements of the sector and the users attracted attention with the differences and the advantages of its exhibited products. HAUS, which is glad to see many international visitors at its stand, aims to increase its activities in European market through the attendance at the fair.


How can we help you?

Click here to get a quote for our products and services.
Offices & Service Network

Click here for more detailed information about us.
#BECAUSEWECARE

Do you have a question? You can start your search here:


HAUS provides products and service to various applications at olive oil, food, environment, energy and industry sectors.
To become a HAUS agent you may fill the related form: http://hausworld.com/contact.html
"HAUS manufactures a comprehensive portfolio of high-quality centrifuge technology products such as; • Decanter centrifuges, • Disc stack separators, • Continuous system olive oil extraction plants, • Screw presses, • Turbo blowers, • Mobile units and auxiliary equipment and offers familiar service on set-up, turn-key integrated project management, maintenance, spare-parts and aftersales solutions for speciﬁc markets and industries."
The chemicals you need vary according to the properties of the product you are processing. We can determine the chemical needs that will be suitable for your product as a result of laboratory studies. You can contact the sales representative who has dealt with you at the order stage and send your request.
During the guarantee period, if the scheduled maintenance of your product is not carried out on time by the authorized service, any damage due to breakdown may cause your product to be evaluated beyond the scope of the warranty. To prevent this situation, planned maintenance of your product is recommended to be done on time. In order to make a planned maintenance agreement, you can fill out related form: http://hausworld.com/page-28-maintanence-repair.html
You can contact the Commercial Affairs department at +90 256 231 0481.

I Agree Read More About
GET A QUOTE
We will be happy to help you! We will be able to respond to your quote request with just a few details.

DOWNLOAD BROCHURE
We will be happy to help you! We will be able to respond to your download brochure request with just a few details.


CONTACT FORM
We will be happy to help you! We will be able to respond to your inquiry with just a few details.

CREATE SERVICE RECORD
We will be happy to help you! We will be able to respond to your service request with just a few details.

JOB APPLICATON FORM
We will be happy to help you! We will be able to respond to your job application with just a few details.