HAUS attended IFAT 2018 Fair, which took place in Munich Fair Area between May 14-18. Since 2012, the company has been attending that fair, which takes place once every two years and in its fourth attendance it launched its screw press and magnetic bearing turbo blower for European Market. The company is designing its new products with an innovative approach by making improvements to its current products in the R&D Centre, established in 2015. HAUS knows the sector and the market with the needs of the users well and by enlarging its product range it is adding new products to its structure. As of 2017, it put its screw press on the market, which was designed for the sludge dewatering applications for environment sector and the new models of this product attracting attention in a short time are ready to be put on the market. In addition to this, it put magnetic bearing turbo blower with a magnetic bedding on the market, which was designed by HAUS Turbo Kompressor company established  by HAUS in 2016 and the studies of which was performed by R&D Centre and the production of which was carried out in the factory of HAUS having the latest production conditions. 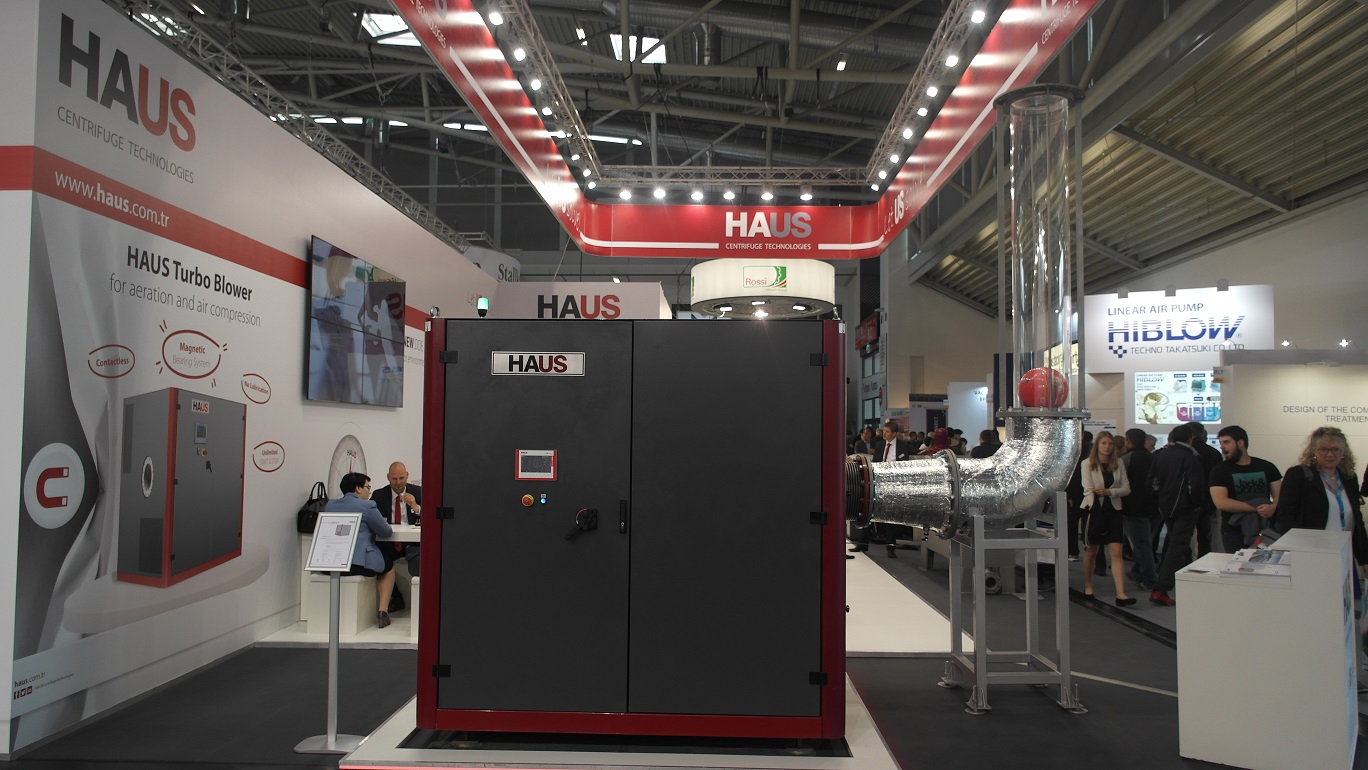 These blowers are widely used in wastewater treatment aeration pools. HAUS carried out Turkish launch of these two new products in IFAT Eurasia fair in February 2017 and the European launch in IFAT 2018. At the launch, operating HAUS Turbo Blower and turning this into a show via a tube mechanism attracted great attention of the visitors. HAUS also exhibited one of the New Generation DDE Series environment applications decanters, DDE 4742 machine, the regulation of which was made by R&D studies. The visitors were given detailed information on energy saving provided by this new design and its high capacity and a drier cake data. Throughout the fair, HAUS was the centre of attention not only for the products it exhibited but also for the detailed information given by the expert sales team on the product, service and the solutions. That is why it was a busy and productive fair for the company.

IFAT 2018 WAS A MEETING POINT FOR HAUS

After establishing a sales and marketing office in Istanbul in 2010, HAUS established HAUS Europe B.V. for the European market in 2012 and HAUS SEA sales offices for the Asian market in 2015. For the company having around 40 dealers worldwide, IFAT 2018 was a meeting point with its companies and dealers. It had a chance to guide visitors from many different regions directly to market authorities.


How can we help you?

Click here to get a quote for our products and services.
Offices & Service Network

Click here for more detailed information about us.
#BECAUSEWECARE

Do you have a question? You can start your search here:

I Agree Read More About
GET A QUOTE
We will be happy to help you! We will be able to respond to your quote request with just a few details.

DOWNLOAD BROCHURE
We will be happy to help you! We will be able to respond to your download brochure request with just a few details.


CONTACT FORM
We will be happy to help you! We will be able to respond to your inquiry with just a few details.

CREATE SERVICE RECORD
We will be happy to help you! We will be able to respond to your service request with just a few details.

JOB APPLICATON FORM
We will be happy to help you! We will be able to respond to your job application with just a few details.